What is nonsense verse?

It's easier to recognise nonsense poetry than it is to explain it. There is, however, some consensus that the its defining characteristics include: 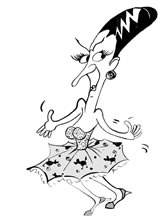 The problem is that as soon as you try to define or dissect it, the magical surrealism turns to dust. Nonsense verse is to be read and enjoyed, rather than pawed and pondered over.

It makes no sense at all

It's as well to remember that nonsense verse often have no deep meaning. Children and the prematurely senile usually cope well with nonsense poems, whereas serious-minded middle aged folk can't grasp that poems can be deliberately silly and senseless and still worth expending valuable time reading. Allow yourself just a few minutes to escape the mundanity of your everyday life and enter the whimsical and weird world created by Max Scratchmann.

Finding your way around

The poems have been classified, wherever classification was possible, by subject. This initial sheep and goats exercise gave collections of nonsense poems about love, sex, disease and death. The remaining poems were then divided into pure nonsense, for the clean, wholesome, family-friendly poems and rude rhymes, which contains the darker, dirtier material.

This Adult Nonsense Poetry website is an offshoot of Peculiar Poetry, a collection of slightly more conventional funny poems to which Max contributes. Try and mix the two, as an undiluted diet of nonsense can have unforeseen, and often unpleasant, consequences.

A new collection of poems about love and relationships for Valentines Day 2015.

A nonsense poem about the power of luxurious lingerie to attract men.

A cautionary poem about a sinister stranger with murderous intentions.

A Lunar Cycle is NOT a Moon Bike

A convoluted and blood thirsty tale involving punk, sex and more besides.

Mythological mayhem and sexual shenanigans make for a petrifying read.

A funny, touching and only slightly seedy poem about Artificial Insemination..